A disease that slowly kills Iris plants. They slowly turn brown over a time period, with the rhizomes remaining hard. A prevention from death can involve cutting the rhizome into sections. Thus an infected clump will usually have one part survive.  It is necessary to dig up the clump to examine it closely.


The Iris borer can also eat out a clump and the leaves will also turn brown from the tips down. This can be quite fast as the borer is in the rhizome before this effect is noticed and it proceeds quickly. If you dig up the plant you find a chewed out area (usually quite large) and sometimes the borer is still present. Soft Rot can also cause similar problems. In this case when you dig up the plant you will find a mushy plant, or what remains of the rhizome.

Scorch is caused by an infection by phytoplasm, a type of bacteria without an outer shin. It can only live inside vessels inside plant and in saliva gland of sucking insects. The insects are the transmitting vector.

A recent suggestion for cure of scorch involves heating the plant to 104 degrees F. for a few days. This seems to kill the scorch, leaving the plant unharmed. This can be done with a covering over the plant, but care must be taken that the temperature doesn't get too hot and cook the plant.


The moth lays it's eggs late fall and they overwinter on the leaves. They hatch in early spring, around the time the daffodils come into bloom. They are initially near the top of the leaves, usually where the leaves separate from each other. They gradually chew their way down the plant and three weeks after the TB's stop blooming, they are in the rhizomes. About the end of August (here in southern Ontario) they have left the plant and are in metamorphosis.


Sprays are no longer available to home gardeners in Ontario, and most of Canada. for Americans, Bayer have a number of formulations containing "Imidacloprid" as an active ingrediant. Available at most hardware and gardening centres. The lawn and grub granuals will work, but awkward and expensive. Get the "Tree & Shrub" liquid and mix it as per the weaker "insect " spray. Spray early in season for best effect.


The organic method is to hunt and squeeze. Chew marks are often seen at the place where the leaves separate from each other. By opening the folds you can often trace the chewing damage until you find the borer. They can be removed and disposed of. This can also involve squeezing the borer between the leaves. 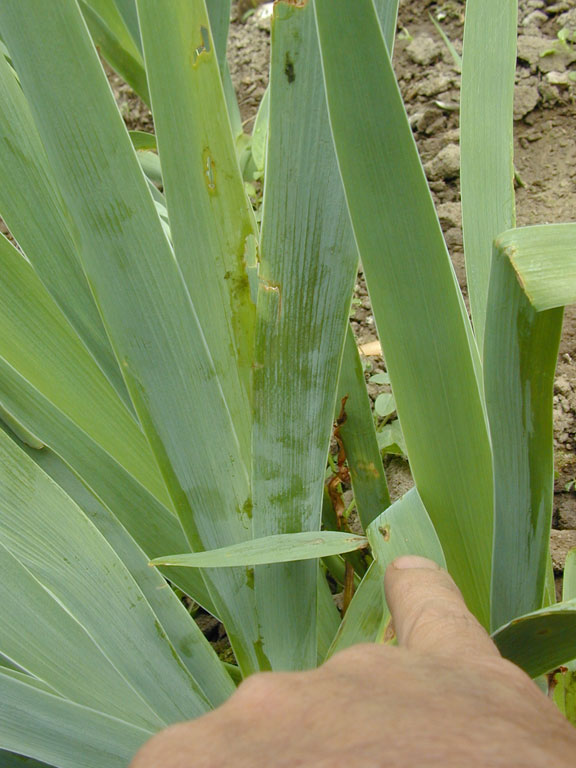 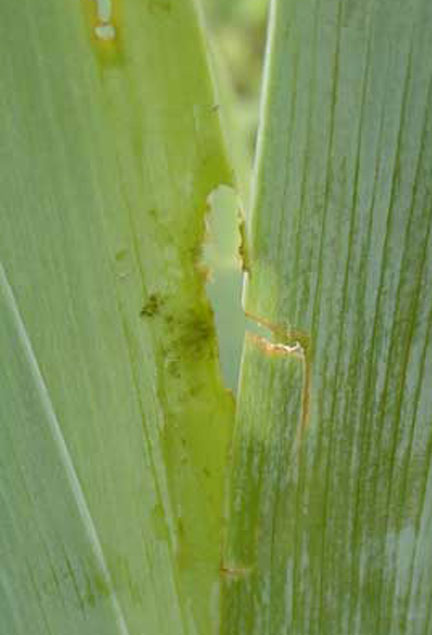 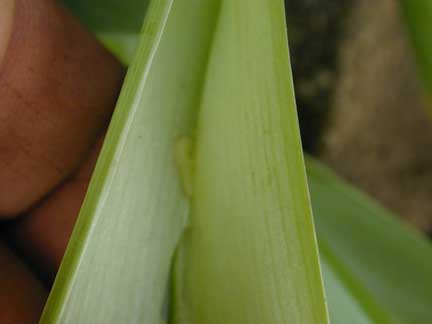 At this time (during blooming season) the borer is very small 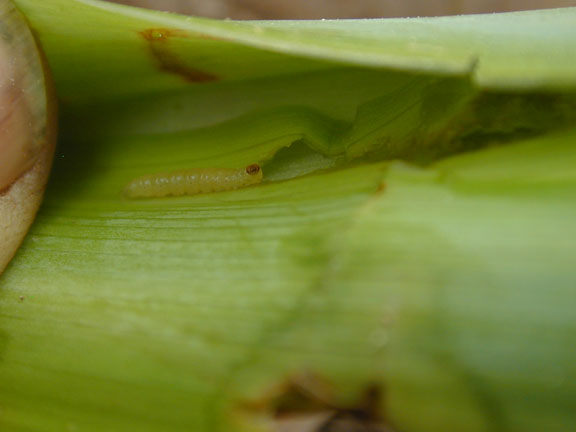 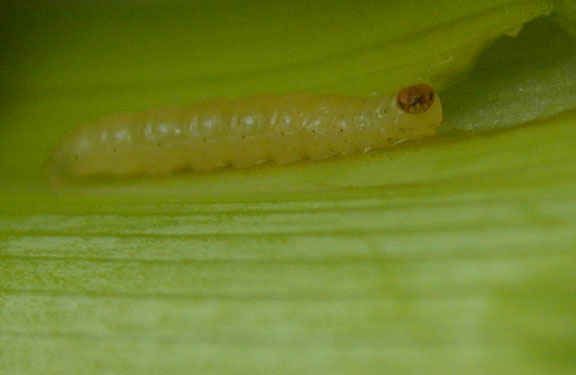 Only about 1/16". They gradually eat their way down stem and enter rhizome where they continue to grow. Reaching about 1.5" in length. Matur borer is pinkish. They then go into pupa stage, about mid to end of August in my ag zone 4 garden. The warmer the climate, the earlier they reach maturity. . 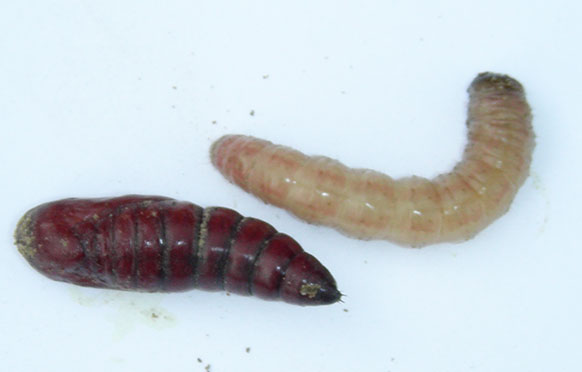 As moth, hatch in early Sept-October to lay eggs for next season in my ag zone 4. The warmer the climate, the earlier this happens. 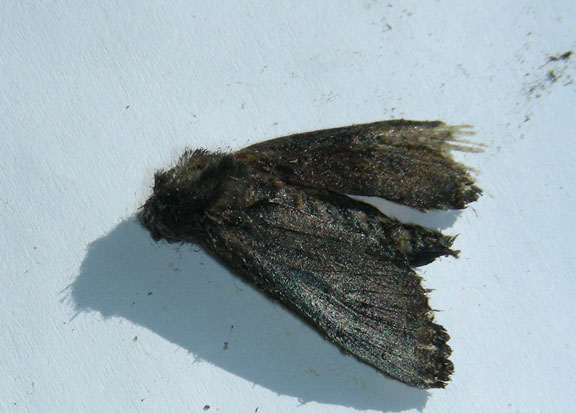 Once you know what to look for , hand removal is not that hard , or theat time consuming. But early in season, before they rech rhizome and do major damage.

This is an annoying and unsightly condition involving small brown spots on the leaves. This is a fungus that, though unsightly, does little damage to the plant. A spray of Benelate (or other fungiside) early in the season can help with this, although it is often necessary to repeat several times in the season. Often the easiest way to deal with it is to just remove the unsightly leaves and dispose of them (but not by putting them in the compost). An increase of nitrogen in the fertilizer can often be helpful, but too much nitrogen can make the plant more susceptible to soft rot.

This is seen more often in older clump where there are a number of factors at work. With the crowding, there is less air circulation between leaves. There is less nutrients available to each fan. Heavy rains can wash out nitrogen. With the plant being less healthy, the plant is more susceptable to diseases.

In following pictures, various pictures of infected plants. This includes a badly infected plant, a dead leaf, and close up of an infected spot. 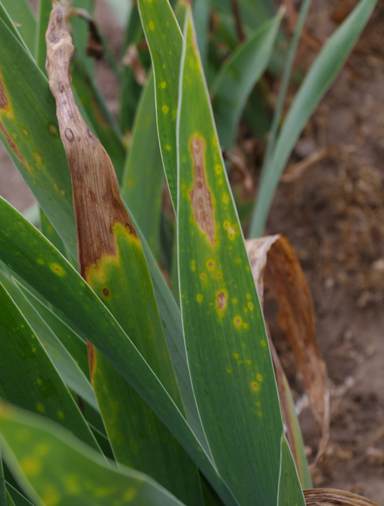 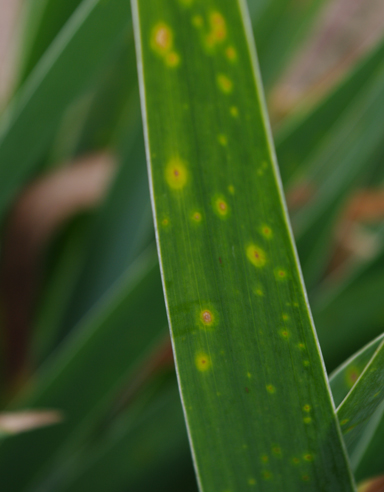 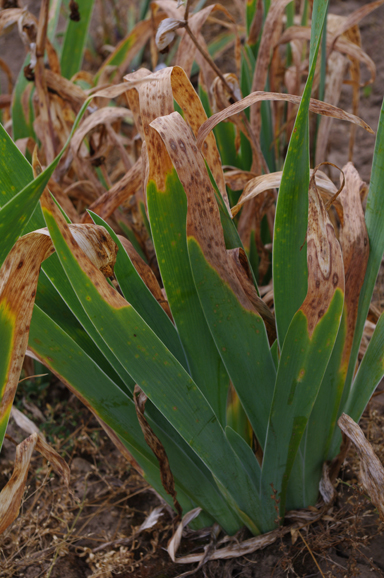 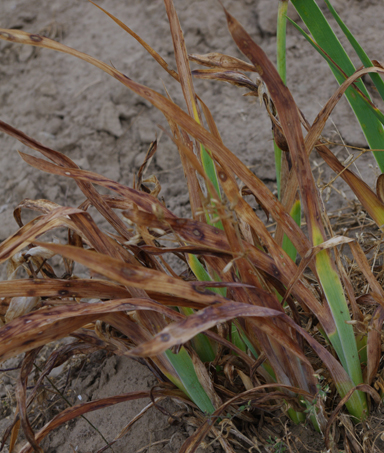 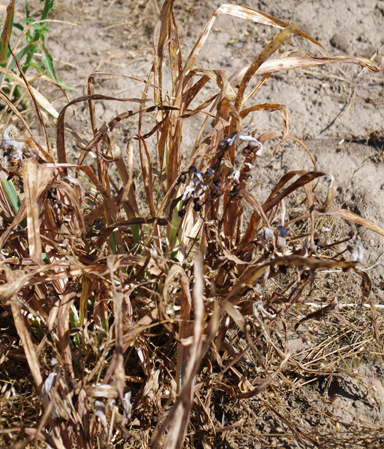 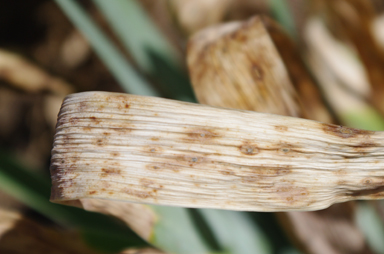 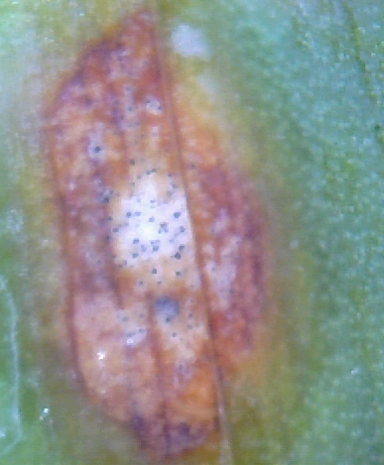 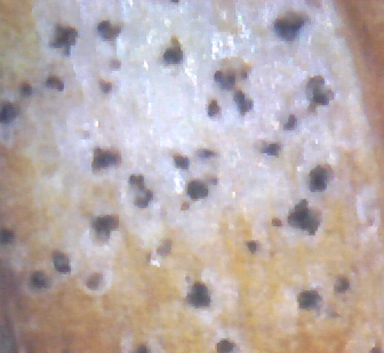 This fungus, by whatever name you use, can also be hosted on Hemerocallis (daylies). This year (2012) there has been reported a problem with dayliles reffered to as "Midwest Malaise". it very well could be same fungus, burt shows slightly differernt as it is on a diferernt species. I suspect that it is worse this year because of weather conditions. A wet sprin with lots of rain can leach out nitrogen in soil, placing plant under stress. Then infection takes advantage of the weakened plant. The fungus doesn't need to transfer directly from iris. It can have been present on the daylilies for a number of years, but only causing mnor problems, that have not been paticularly noticed. So fungus is present, waiting to take advantage of conditions, such as wet spring, followed by hot weather.

. Have mulch around base of plant to prevent splashing of fungus spores onto leaves. Giving plant some nitrogen will help streanth plant. You could try a foliage fertilizer. But remove infected leaves first. Avoid overhead watering if you can. If you do have to water via overhead, be sure to remove all infected foliage first.

This is most often see in mid summer . An inspection at that time would be advisable. Any rot should be removed. I use an old tablespoon that has its edge sharpened. Then I spray the cleaned part with a mix of half bleach and water. Other possible sterilizer/cauteriser are Lysol, powdered sulphur, comet cleanser, or disinfectant liquid soap.

Soft rot is caused by the bacteria Pectobacterium carotovorum, previously called Erwinia carotovora. This bacteria varies widely and there are many known subspecies, some are specific to certain species of plants.

Planting depth has no, if any , affect on development of rot. The rot infection starts at the interface of soil and air. Regardless of planting depth, there is always an interface.

The soft rot bacteria requires high humidity and air to start its infection. It is basically an opportunistic pathogen. It is always present in the soil, where it’s normal function is to digest dead plant material. Given an opportunity it can switch from being a saprotroph (feeding on dead plants ) to being a necrotroph (feeding on living plants). For this to happen it needs air, moisture and warmth. Crowded clumps with poor air circulation provides a prime opportunity for it to grow, as moisture is retained. To switch from eating dead plants to feeding on live material requires a change in it epigentic programing. This happens through a process called quorm sensing . This happens through a build up of a large number of bacteria, and when it reaches a certain density, signal is given, and all the bacteria at same time switch to Digesting the cell wall material called pectin (hence it’s name Pectorum) . Plants have a defence against this bacteria, but this defence is overwhelmed by a mass attack. So it is a strategy by the bacteria to over come normal plant defences.